The Huntington Republican Committee’s 2021 slate of candidates for Town office will build on the tremendous progress achieved by the Town Board’s Republican Majority during the last four years. Led by supervisor candidate Ed Smyth, who was first elected to the Town Board in 2017 and currently serves as Deputy Supervisor, the Republican candidates will continue the Republican Majority’s record of holding the line on property taxes, combating overdevelopment, ensuring public safety and making Town government more accountable.

“When Republicans won a majority on the Town Board in 2017, they put an end to years of massive property tax increases and uncontrolled development that urbanized large parts of our town,” said Huntington Republican Chair Thomas McNally. “Since then, conservative Republican leadership has changed the trajectory of Huntington—capping property taxes, limiting the allowable size and density of new development and enacting term limits.”

Before Huntington voters elected a Republican Majority in 2017, the Democrat-led Town Board repeatedly broke the state property tax cap, including one of the largest tax increases in Town history in 2017, which was also supported by Gene Cook. Since 2018, the Republican-led Town Board has held the line on property taxes and protected the state tax cap—saving Huntington homeowners and small businesses millions of dollars.

The Republican Majority on the Town Board adopted term limits and strengthened Town ethics laws to enhance financial disclosure, prevent nepotism and stop former Town officials from exercising influence on behalf of private clients. Republicans also repealed Democrat-passed zoning changes that allowed an unlimited number of apartments to be built on commercial and mixed-use properties and resulted in every unpopular development project built in downtown Huntington over the past decade.

“Democrats were content to let Huntington be overrun with unchecked development, turning a historic town with suburban charm into a city,” said Chairman McNally. “Through the leadership of Councilman Smyth, Republicans stood up and saved our town. Just last month, the Democrats and their partner Gene Cook tried again to allow high-rise apartments to be built from one end of town to the other. Thankfully, Ed Smyth and dozens of concerned Town residents joined together to stop them.”

“We have a tremendous slate of candidates that Huntington taxpayers can believe in,” said McNally. “There’s no question that Ed Smyth, Sal Ferro, Dave Bennardo and Andre Sorrentino will protect the wonderful quality of life that makes Huntington such a special place to live.”

Sign the petition opposing overdevelopment in the Town of Huntington. 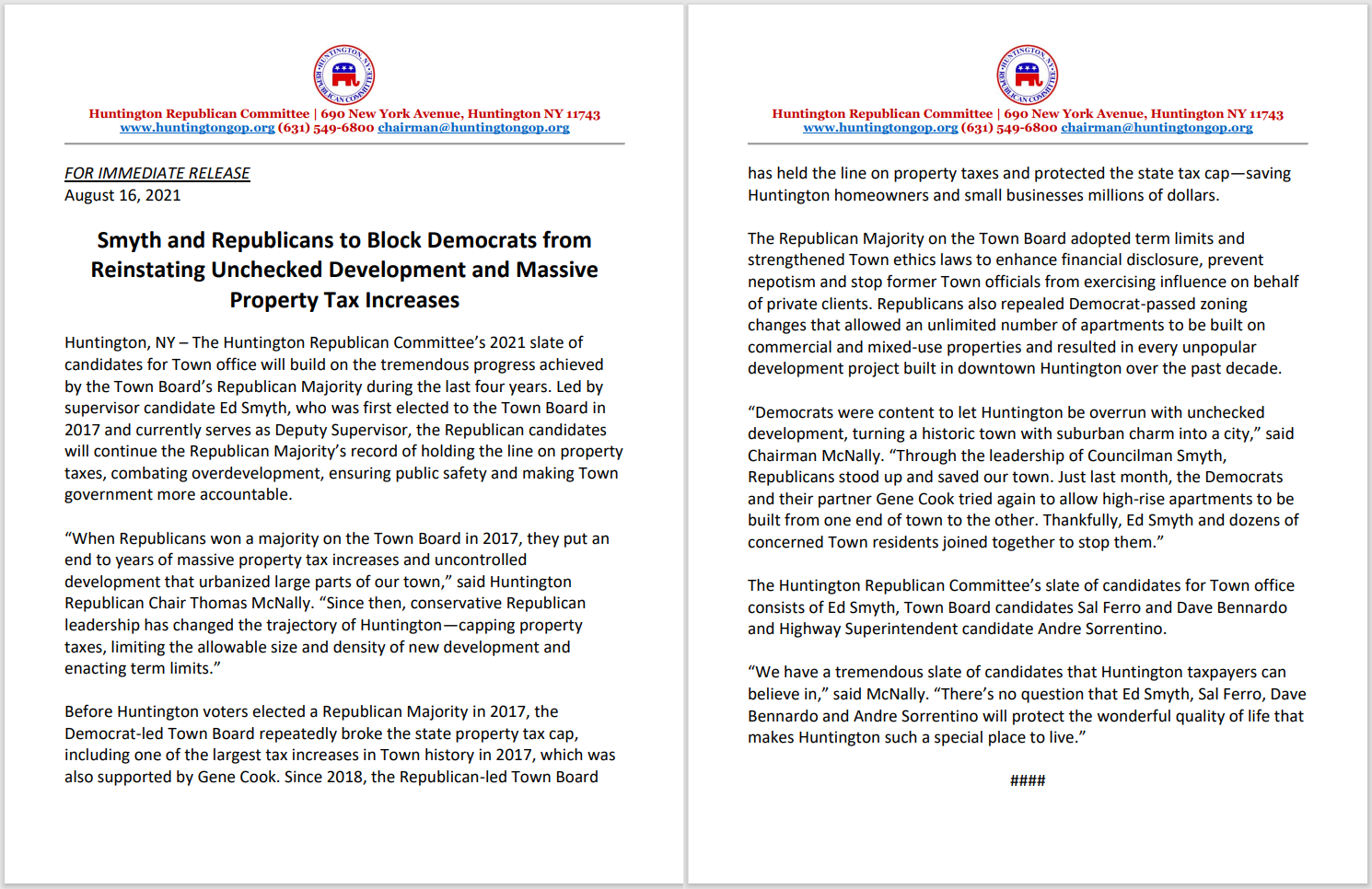