Local Republicans Back Nick LaLota -- And Here's Why You Should Too

There is a reason why Navy Veteran Nick LaLota is the only Congressional candidate trusted and endorsed by both the Republican and Conservative Parties as well as over 45 local Republican officials on Long Island: he's one of us -- a lifelong Long Islander, lifelong conservative Republican, and we've worked alongside Nick for years electing Republicans and protecting election integrity together.

Please vote for Nick LaLota in the August 23rd Republican Congressional Primary at your regular polling place or vote early until August 21st. 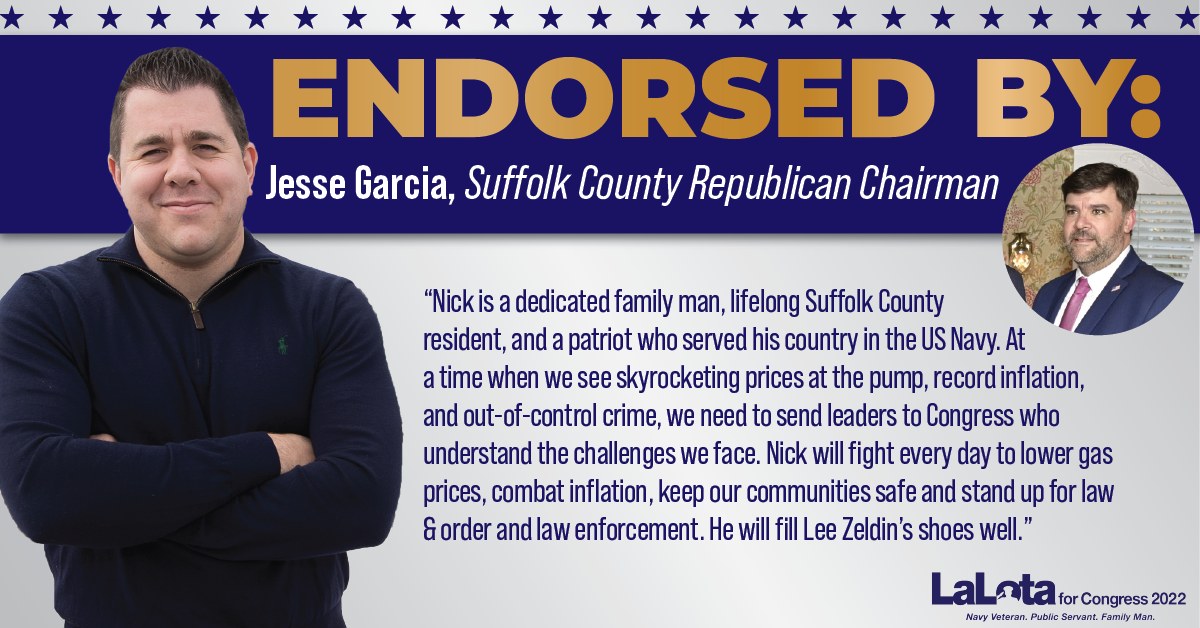 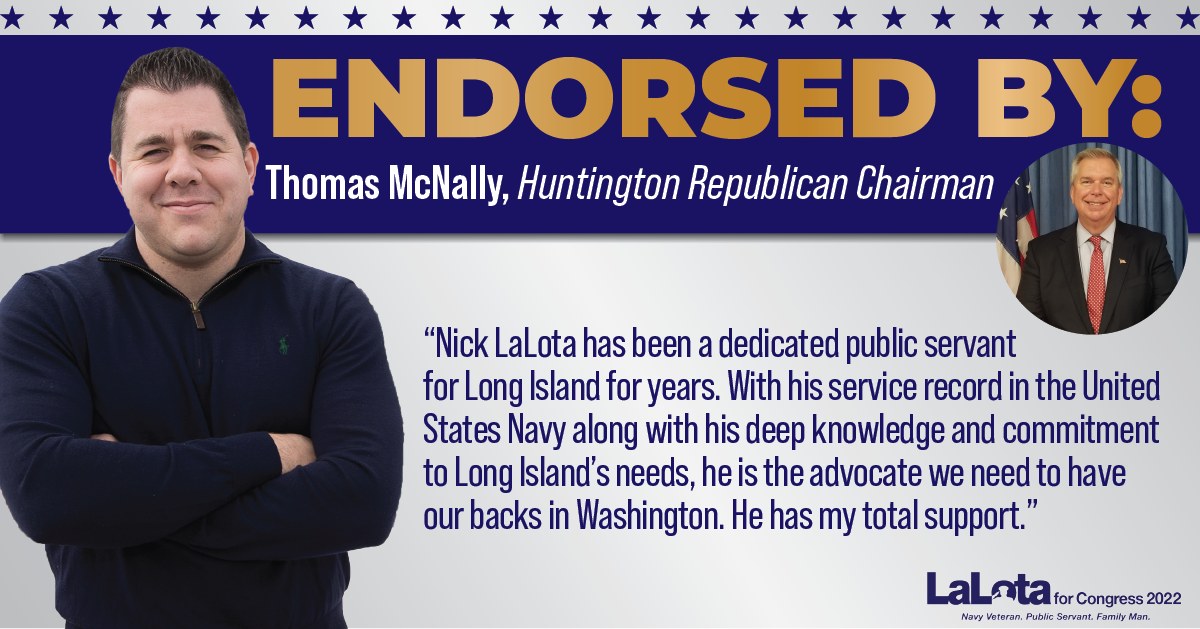 "A fellow veteran who has also served in local public office, I know Nick learned in the Navy the same lessons on leadership and discipline that I gained in the Marines. Nick has the courage, experience and drive to deliver on his promises and fight to bring our federal tax dollars back to Long Island to improve our roads, infrastructure, and public safety." 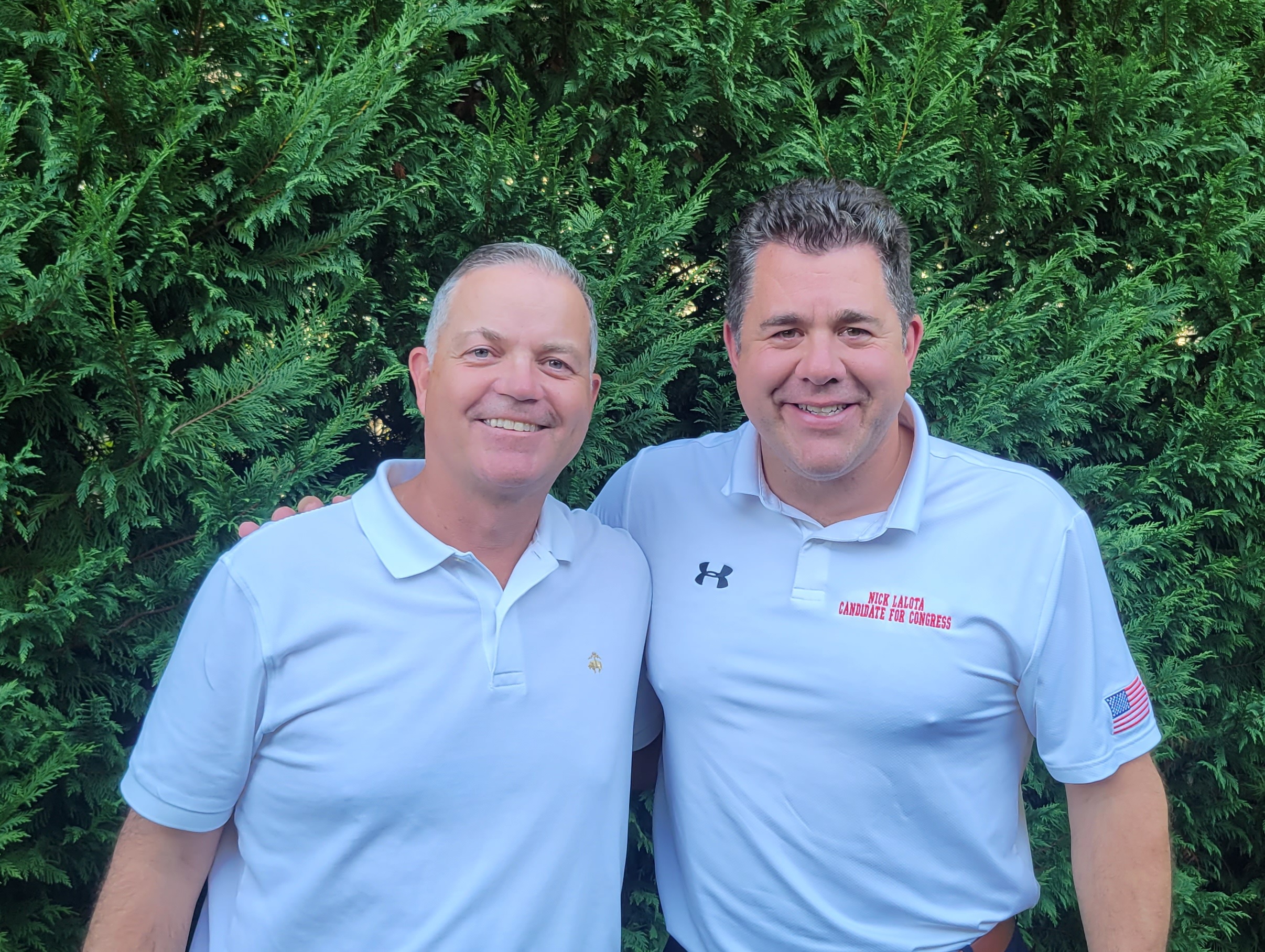 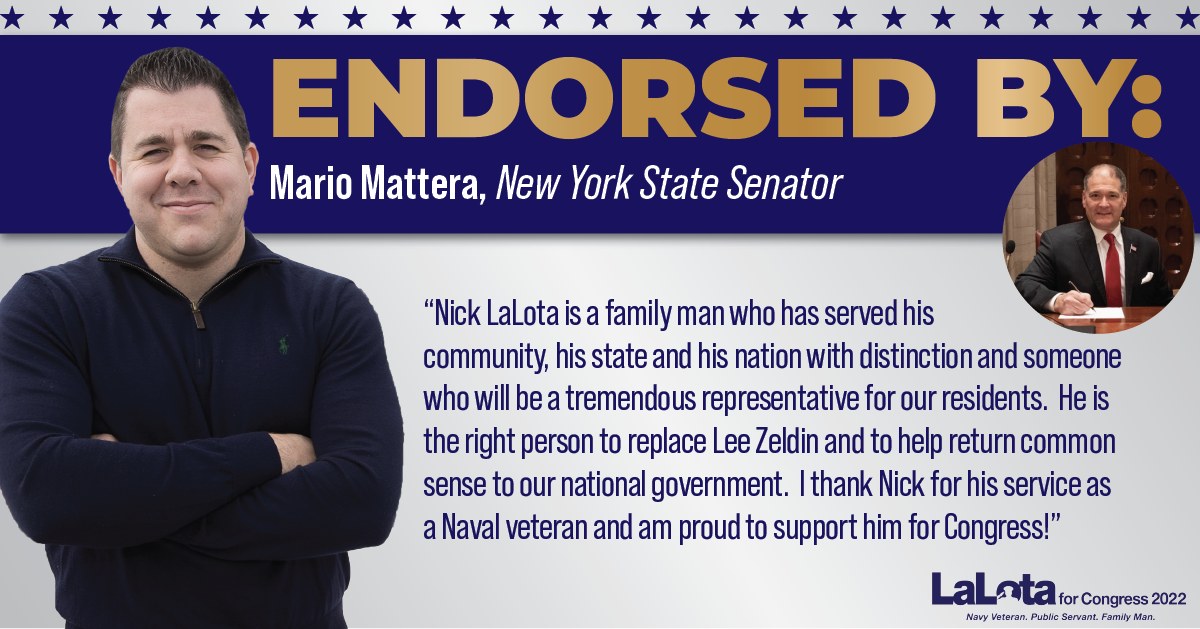 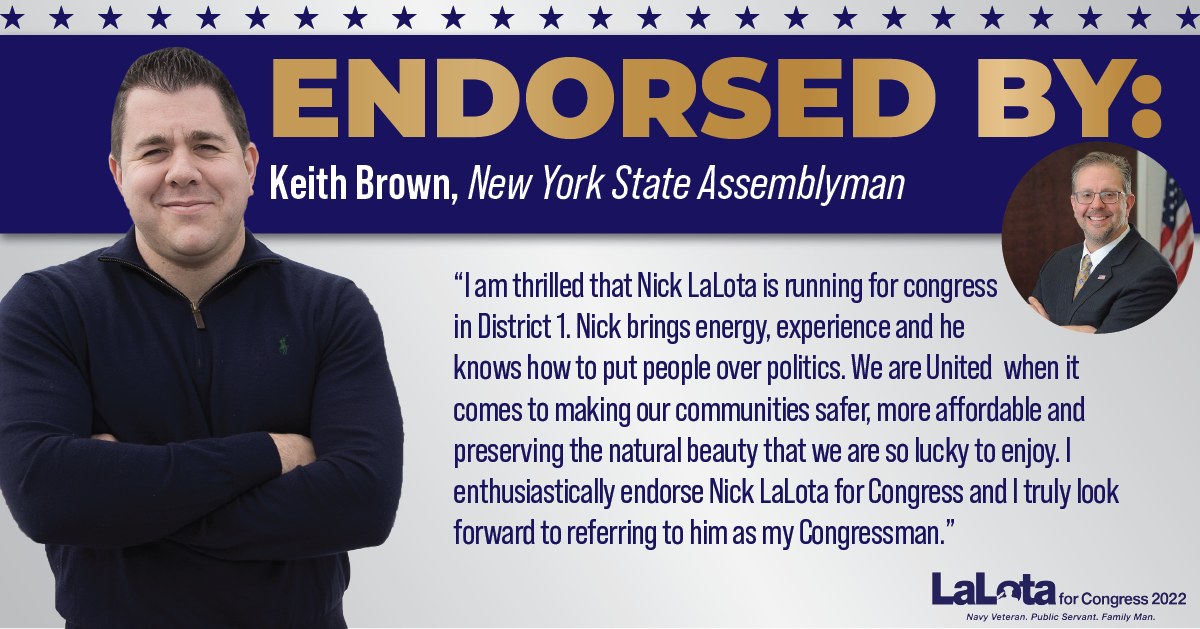 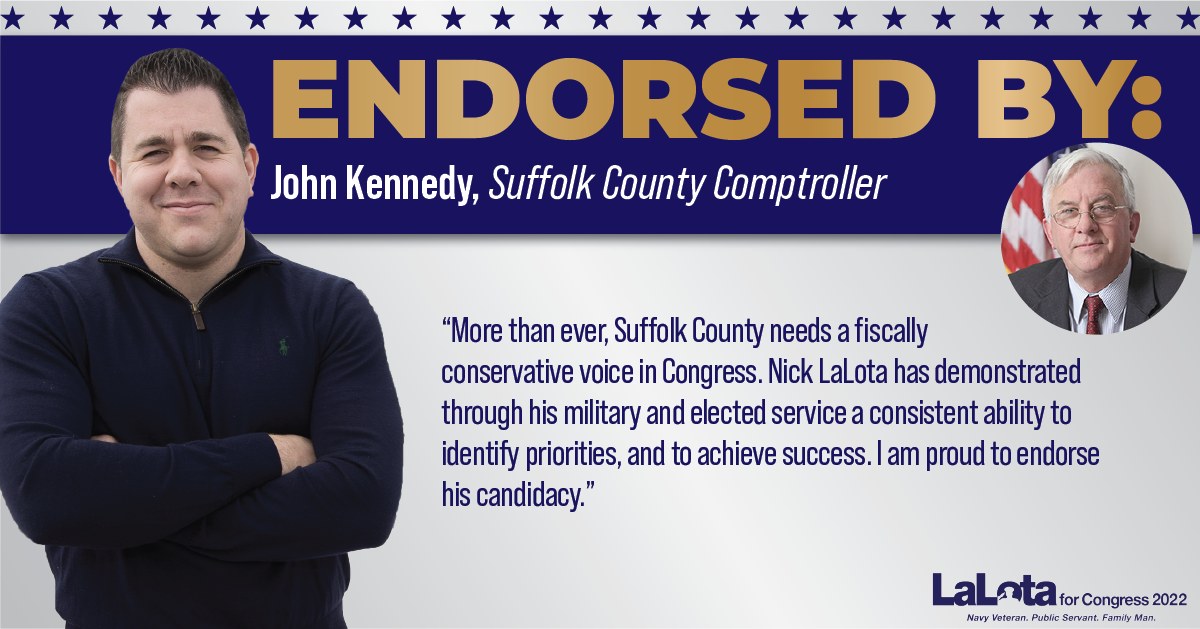 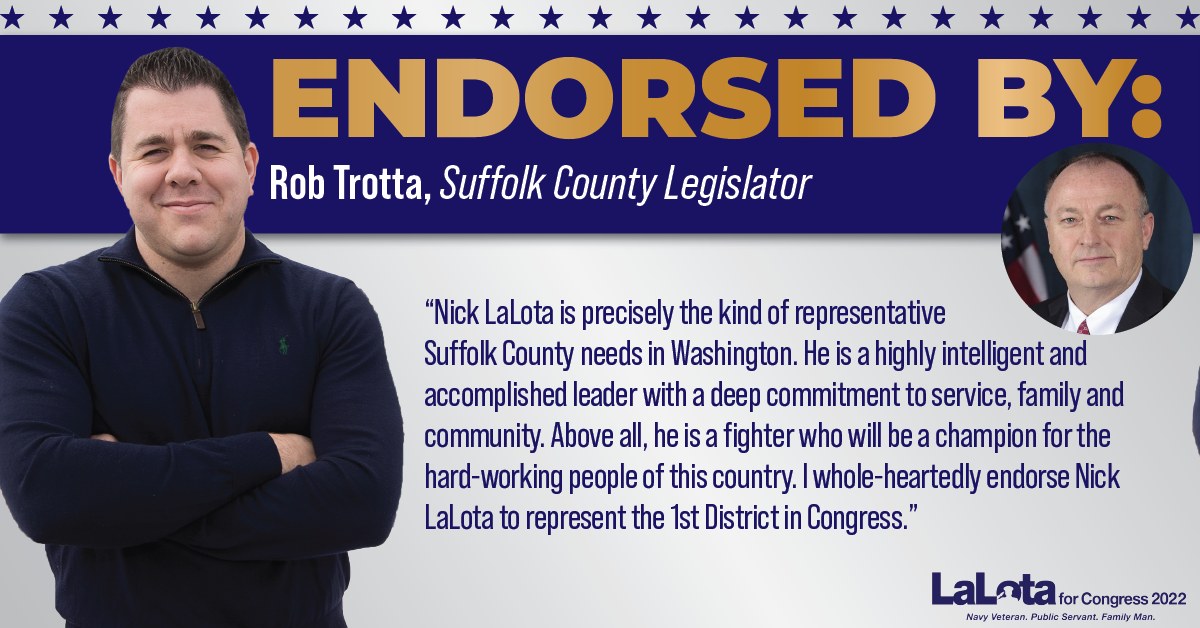 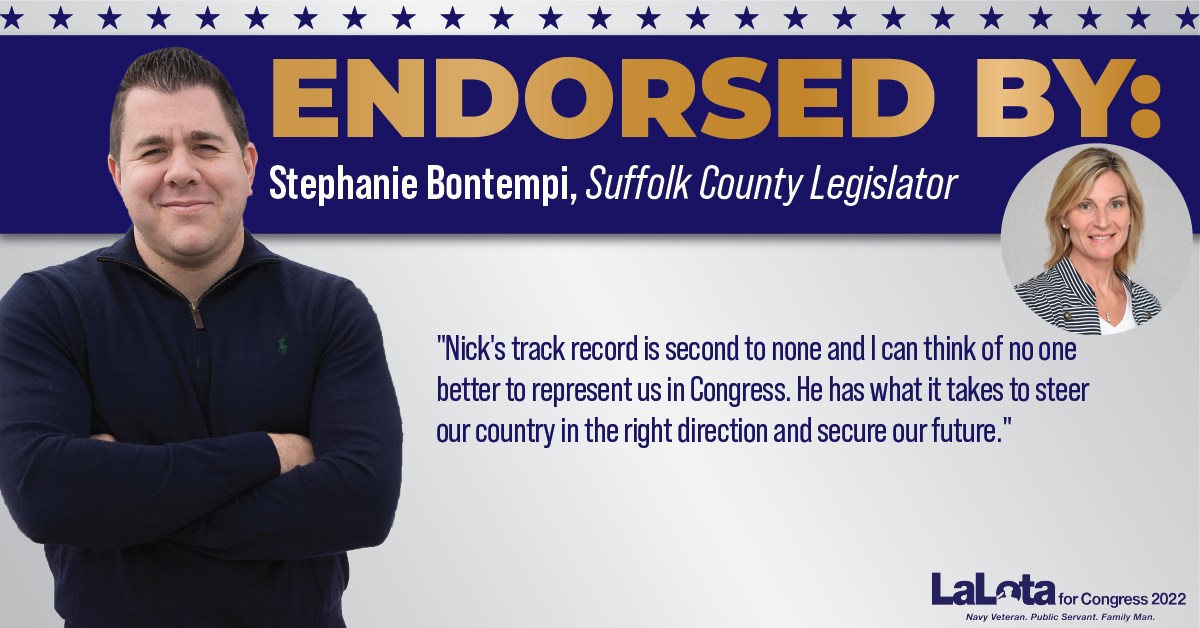 "I've known Nick for many years and have worked with him closely in Albany as a former State Assemblyman. I know he will make an excellent representative and fight for Long Island's needs in Washington. Nick has a long-standing track record of service for Long Island. He’s fought for sensible tax cuts and supported law enforcement for years. He served abroad and at home, and we need his experience and hard work in Congress." 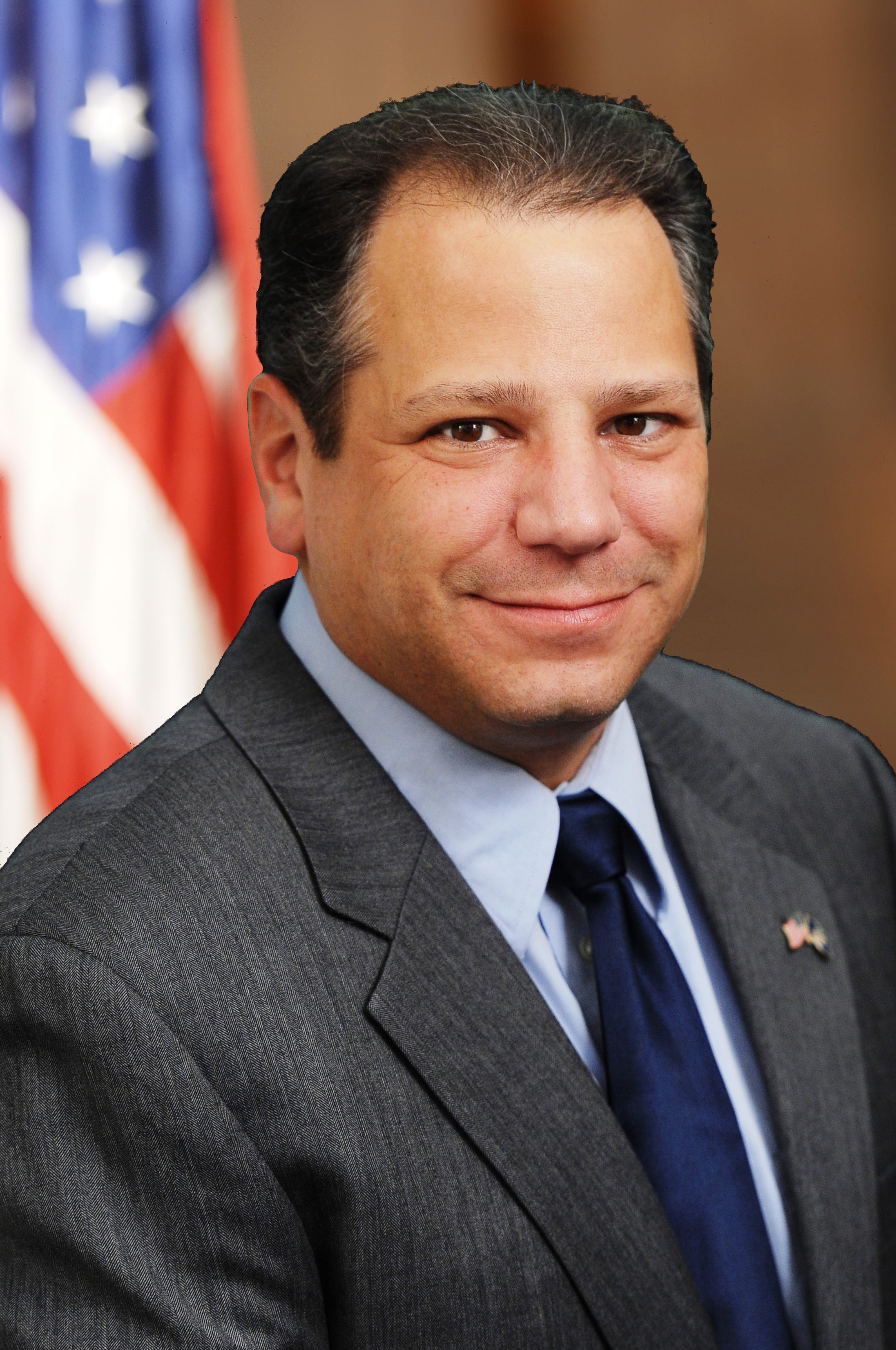 "Nick LaLota is a true patriot who served our country with distinction and will now bring that same character and tenacity to Congress. Nick is the man who possesses both the work ethic and integrity needed in Washington and we look forward to watching him represent the 1st Congressional District." 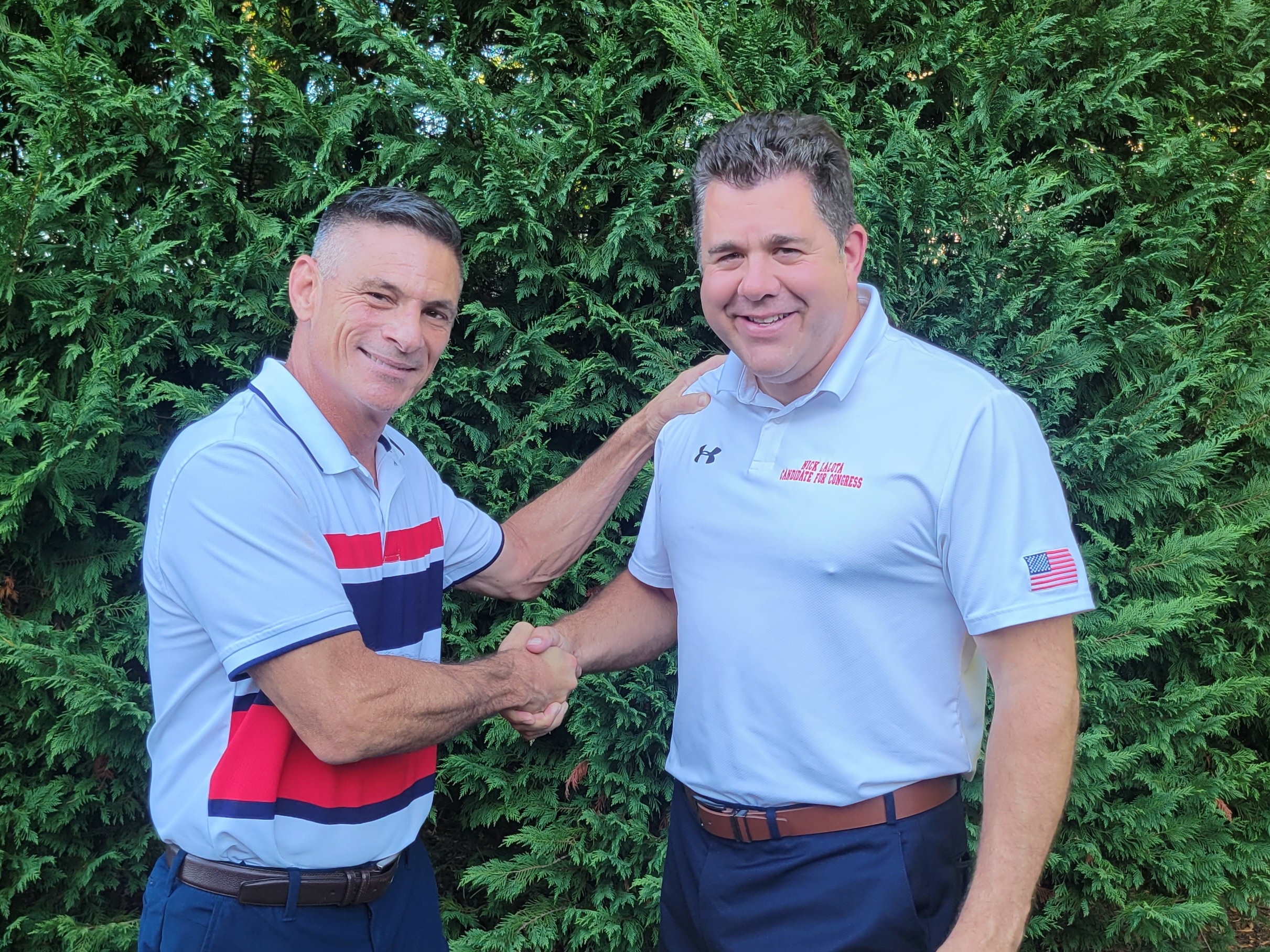 "We can trust Nick LaLota to fight for working people and promote policies that will get wages rising again, bringing jobs and financial stability back to Long Island." 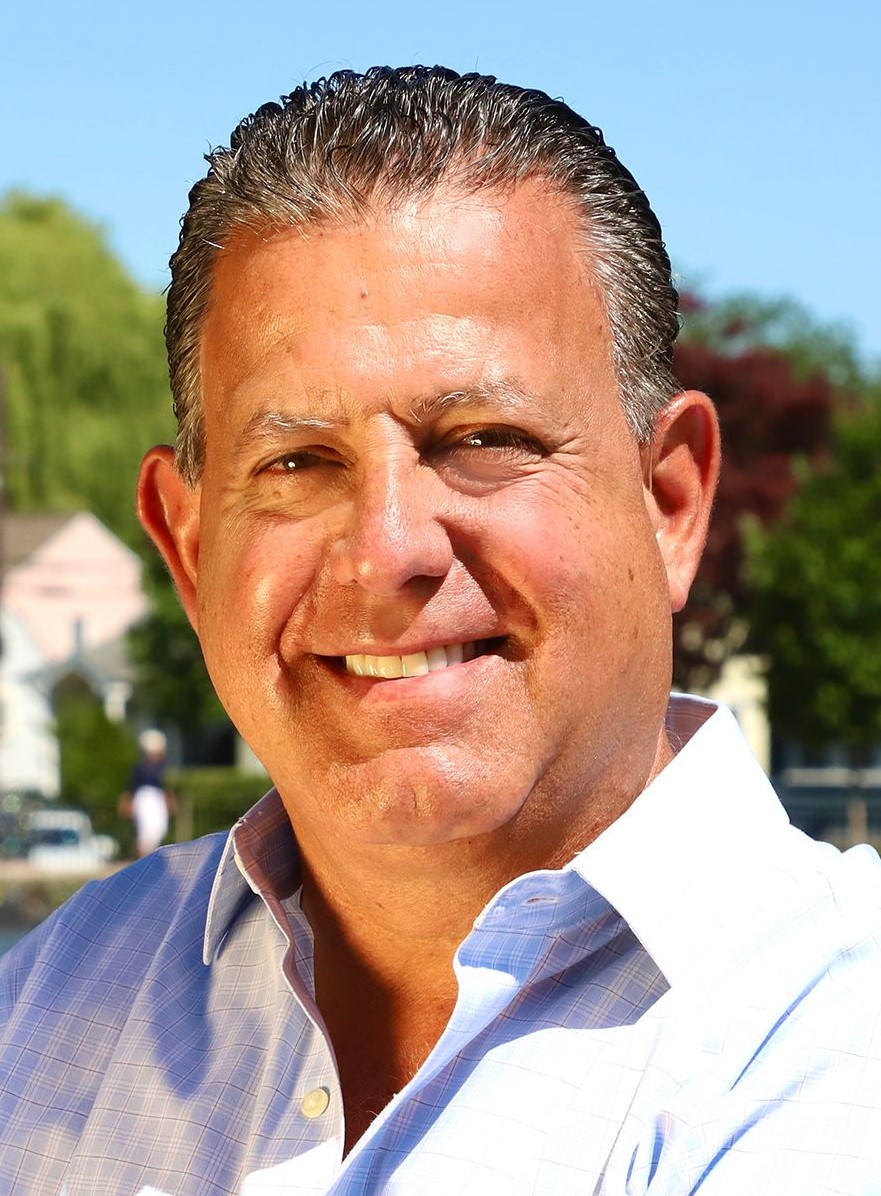 "I back Nick LaLota 100%. Nick worked with local Fire Officials to start a Village Fire Marshal program, he increased funding for EMTs, police officers and life-saving equipment, and he started his Village's first major road paving project in 20 years while staying under the Tax Cap. Nick will fight to fund our roads and keep our community safe -- and his record proves it." 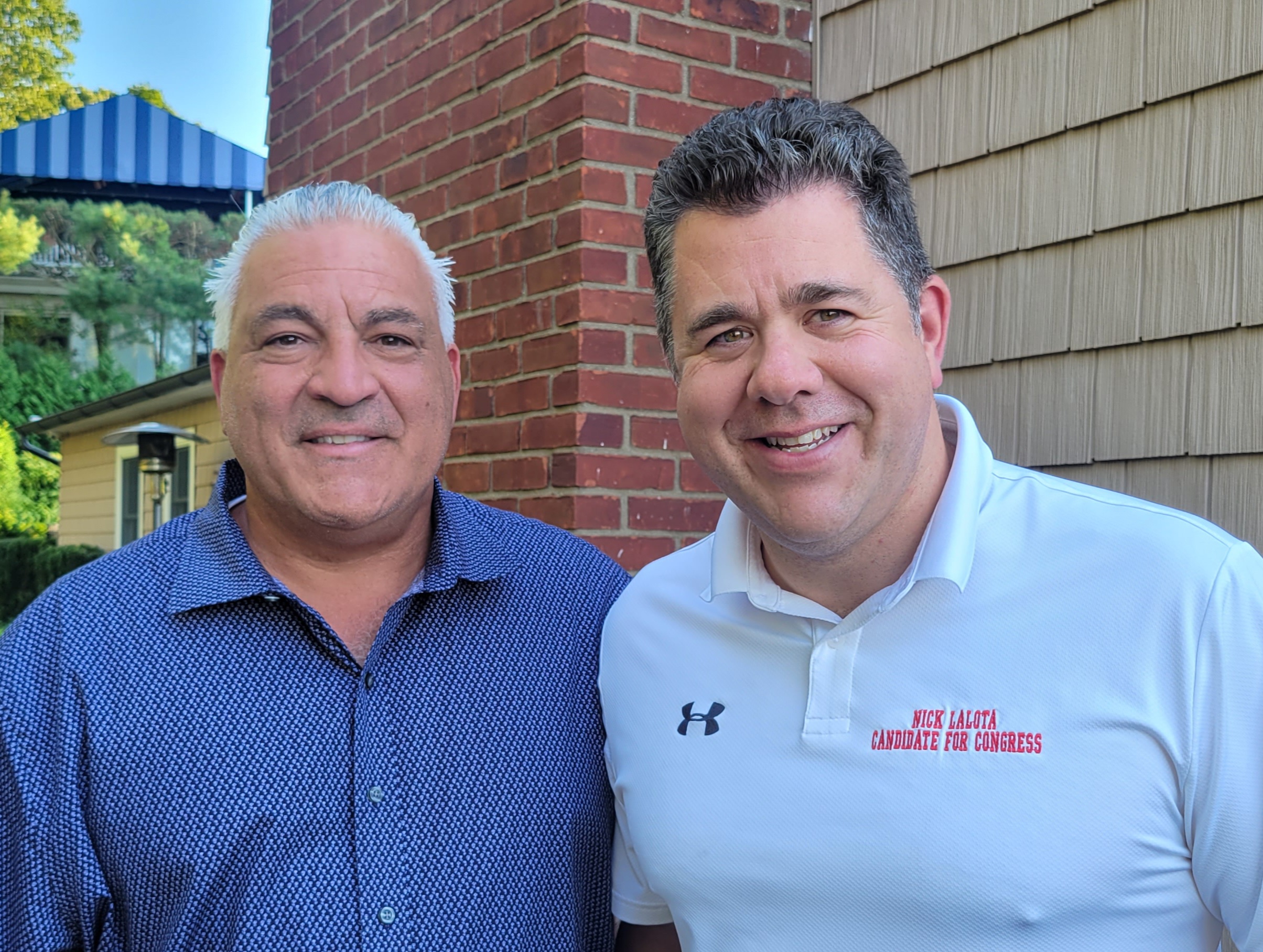 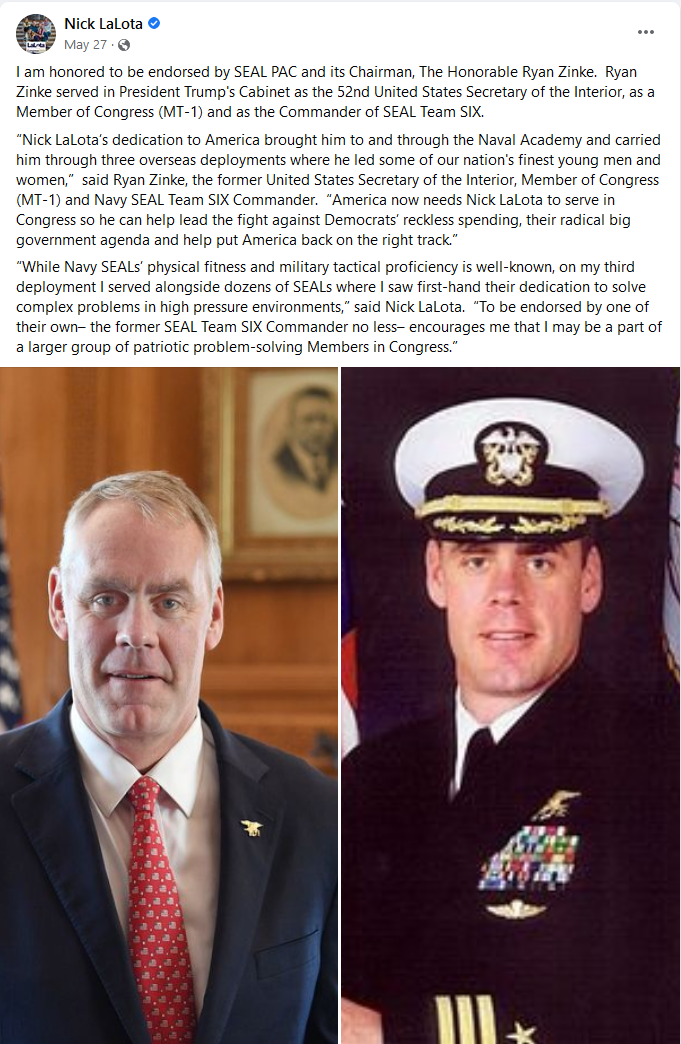 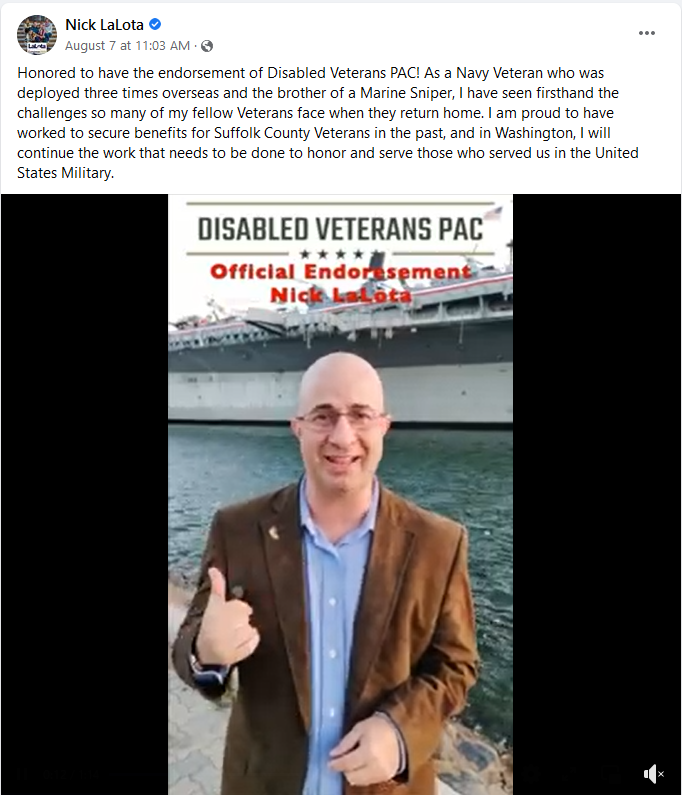 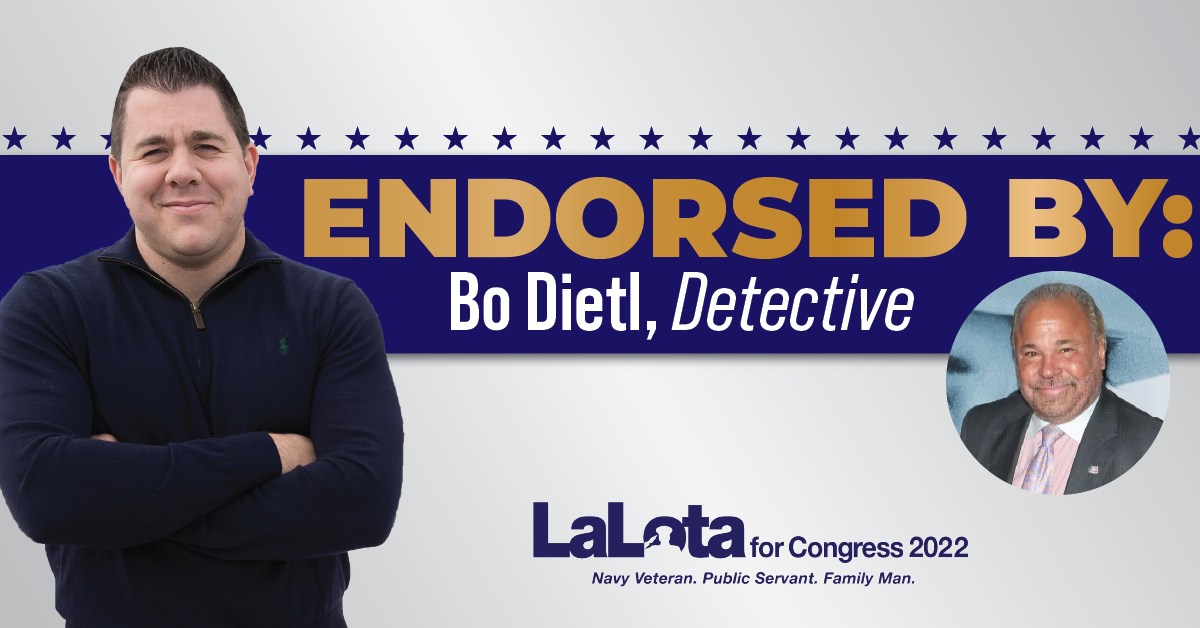 Please vote for Nick LaLota in the August 23rd Republican Congressional Primary at your regular polling place or vote early until August 21st.