When it comes to single-payer, socialized healthcare, Taxin' Tom Suozzi is all in. 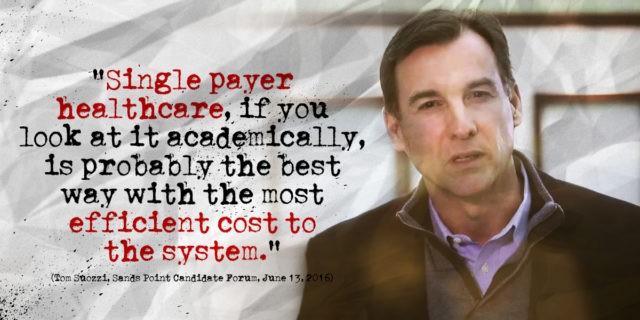 During a Sands Point candidate forum last year, Suozzi gave voters his honest opinion: “Single-payer healthcare, if you look at it academically, is probably the best way with the most efficient cost to the system.”

Suozzi’s liberal colleagues in California decided to test his academic theory, and their analysis revealed implementing single-payer comes with price tag of $400 billion.

The measure envisions using all public money spent on health care — from Medicare, Medicaid, federal public health funds and “Obamacare” subsidies. That’s enough to cover about half of the $400 billion cost, according to the legislative analysis.

The rest would come from higher taxes on businesses, residents or both. It would take a 15 percent payroll tax to raise enough money, the analysis said.