GUBERNATORIAL VOTE: The Critical Reason Why You Need to Vote the ENTIRE Republican Ballot Line in 2018

The future of Huntington and Long Island depends on the outcome of the 2018 Elections but there is a critical reason why voting specifically on the Republican ballot line -- "Row B" -- for our candidates is more important in 2018 than any other year -- even more important than a Presidential Election Year. Read on to learn more!

If you believe in the Republican "New Direction" values of keeping Huntington suburban, preserving and maintaining our roads and infrastructure, protecting our water supply and our quality of life, and most importantly, increasing government transparency and implementing meaningful ethics reforms in our town government, then Jim Leonick and Janet Smitelli need your vote on November 6th. 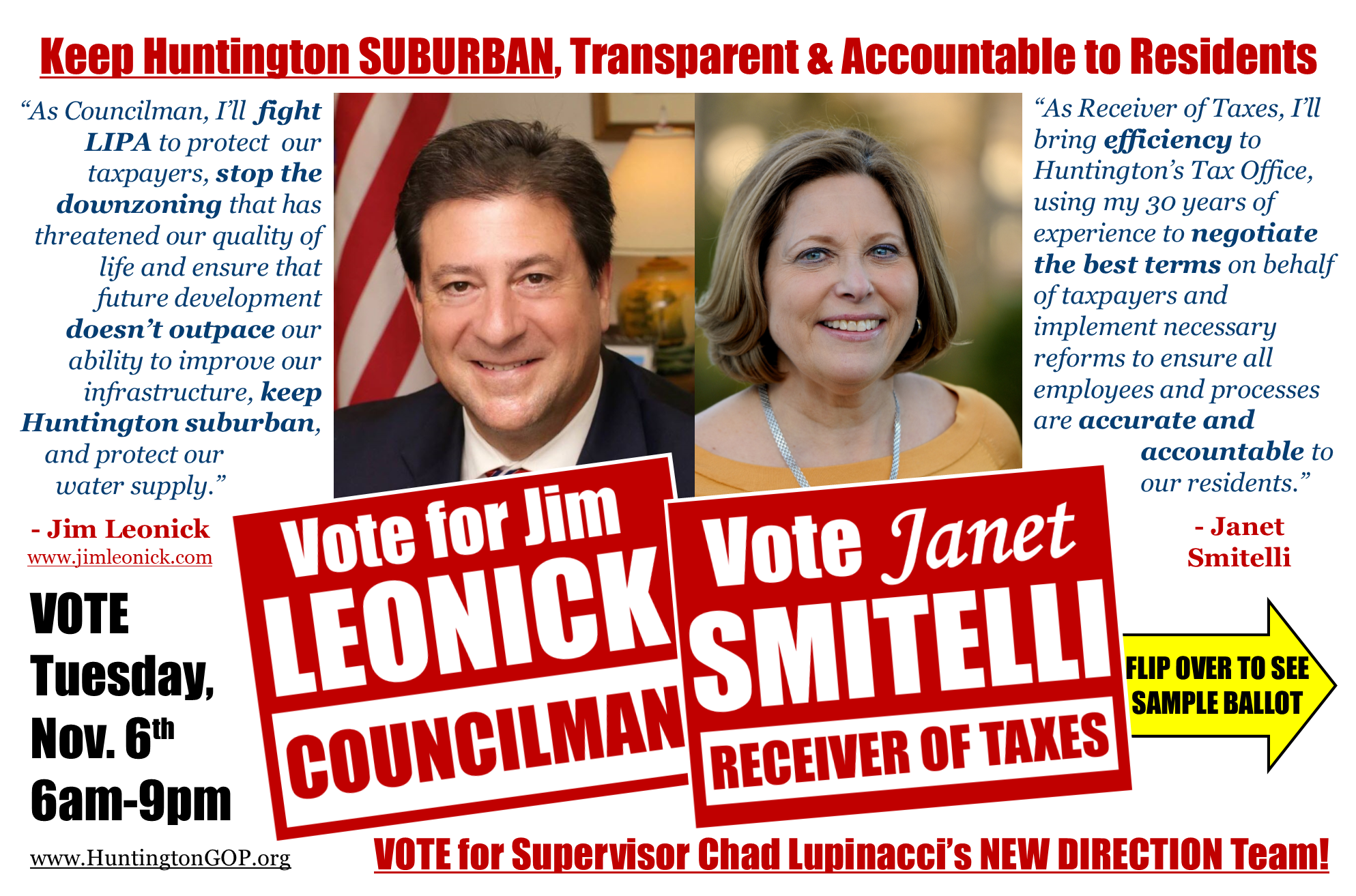 Jim Leonick is a self-employed business owner who possesses the community and public service experience to make the changes Huntington needs. He stands for fiscal responsibility, cutting government red tape, increasing transparency, enacting meaningful ethics reforms, preserving Huntington's suburban aesthetic, maintaining our overburdened infrastructure, protecting our water supply and improving our quality of life -- including leaving no stone unturned when it comes to fighting the LIPA lawsuit. Jim Leonick is a family man and long-time active member of our community, who has stood with residents on the right side of the issues affecting our town. Learn more about Jim: http://www.jimleonick.com.

Janet Smitelli will bring a New Direction of transparency, administrative efficiency and cost-effective operations to the Tax Office! With 30 years under her belt as a seasoned litigator with experience in real estate law, estate administration, probate proceedings, structured settlements, lien reduction and payoff, Janet Smitelli is highly qualified to negotiate the best terms on behalf of Huntington residents to keep payment processing costs down and allow taxpayers to receive the best return on our collective investment. Janet will ensure the Tax Office is transparent, responsive and accountable to all residents' needs and requests.

What Jim Leonick and Janet Smitelli are Up Against 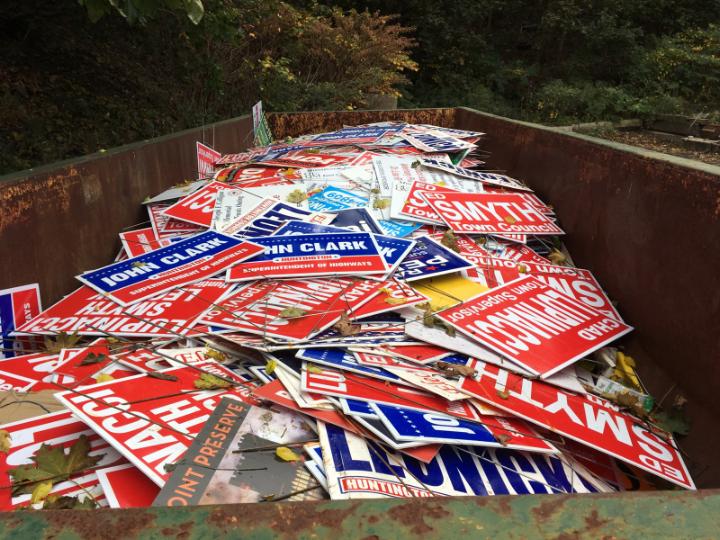 Jim's opponent for the Town Board follows in the footsteps of her colleague, corrupt career politician Mark Cuthbertson, who perfected pay-for-play politics sponsoring resolutions to deliver special favors to his biggest campaign donors over his 20-year tenure on the Town Board. Cuthbertson voted to downzone properties across our town -- from Seasons at Elwood to Avalon Bay in Huntington Station, to Creek Road in Halesite -- to promote his campaign donors' high-density housing projects, which ravaged open space in Huntington.

Jim's opponent -- a career unelected bureaucrat -- put a town agency $1 million dollars in debt to Huntington's taxpayers, made deals with Huntington's biggest slumlord that hurt the Huntington School District, took a $46,000 payout on the backs of Huntington's taxpayers and then voted AGAINST term limits when Supervisor Chad Lupinacci, Councilman Gene Cook and Councilman Ed Smyth delivered this campaign promise in January 2018.

Jim's opponent has questionable ethics and her flawed decision-making will take Huntington backwards in the wrong direction!

Jim Leonick and Janet Smitelli, who is running for Receiver of Taxes, have both been endorsed by our NEW Republican Supervisor Chad Lupinacci and the entire New Direction Team.

But there are other crucial Election 2018 races that will determine Huntington's future:

Dan DeBono is a U.S. Navy SEAL running to support the Republican agenda down in Washington, D.C., and to protect and enhance the liberty of the individual American citizen. Dan needs your help to defeat Tom Suozzi, whose families' ties to LIPA are a serious a conflict of interest in Suozzi's ability to represent the citizens of our town. Learn more about Dan: http://www.debonoforcongress.com/

Chele Farley is running for U.S. Senate to help provide every New York family the ability the succeed and support the Republican Senate Majority in Washington, D.C. Chele is running against Kirsten Gillibrand, who publicly supports abolishing ICE, the agency tasked with protecting American citizens. Learn more about Chele: http://www.chelefarleyforsenate.com/

Suffolk County Comptroller Kennedy is the only check against the Democrats' irresponsible spending and lack of oversight driving Suffolk County deeper and deeper into debt.

County Clerk Judy Pascale along with Comptroller Kennedy are the only forces of transparency standing between the wasteful tax-and-spend policies of Steve Bellone and the Democrat-controlled County Legislature, which is why we must re-elect Kennedy and Pascale on November 6th!

Our New York State Senate Republican Majority's success in keeping tax dollars invested in Long Island schools and roads can largely be attributed to the fact that the Republican Senate Majority is based on Long Island, led by Senate Majority Leader, Senator John Flanagan along with Senator Carl Marcellino, who have successfully fought New York City Democrats to reinvest our tax dollars across Huntington's school districts and roads. Senators Flanagan and Marcellino need your vote to keep Long Island funding in Long Island's schools, and not in the hands of New York City Democrats.

New York State Assemblyman Andrew Raia and Jeremy Williams need your vote to counter the Democrats in the Assembly and provide support to our Senate Majority as they fight the radical leftist agenda Governor Cuomo is pushing on our State.

Marc Molinaro is running for Governor with Julie Killian as Lieutenant Governor against the radical agenda Andrew Cuomo wants to impose on New York, such as when Cuomo signed an executive order this year allowing felons to vote -- including sex offenders -- in our schools, because Cuomo is desperate to hold on to power as he seeks the Presidency in 2020. Learn more about Marc: http://molinaroforny.com/

This brings us to the critical reason why you need to vote the ENTIRE Republican "Row B" ballot line from the start of the Republican ticket -- for Marc Molinaro for Governor and Julie Killian for Lieutenant Governor -- all the way to the end of the ticket -- securing a New Direction in Huntington by electing Jim Leonick as Councilman and Janet Smitelli at Receiver of Taxes to serve with Supervisor Lupinacci and the New Direction Team:

The party that secures the most votes for Governor [in a gubernatorial (Governor) election year] determines party ballot placement for the next four years.

Voting on Row B on Tuesday, November 6, 2018, will determine our party's ballot line placement for every election for the next four years! Improving our party's position on the ballot will vastly improve our chances to hold onto Republican seats and preserve our way of life in Huntington. So please, this year, secure first-place ballot placement for Republican candidates for the next four years: Vote for ALL of your 2018 Republican candidates and fill in the ovals for your candidates on the Republican "Row B" ballot line this November 6th! 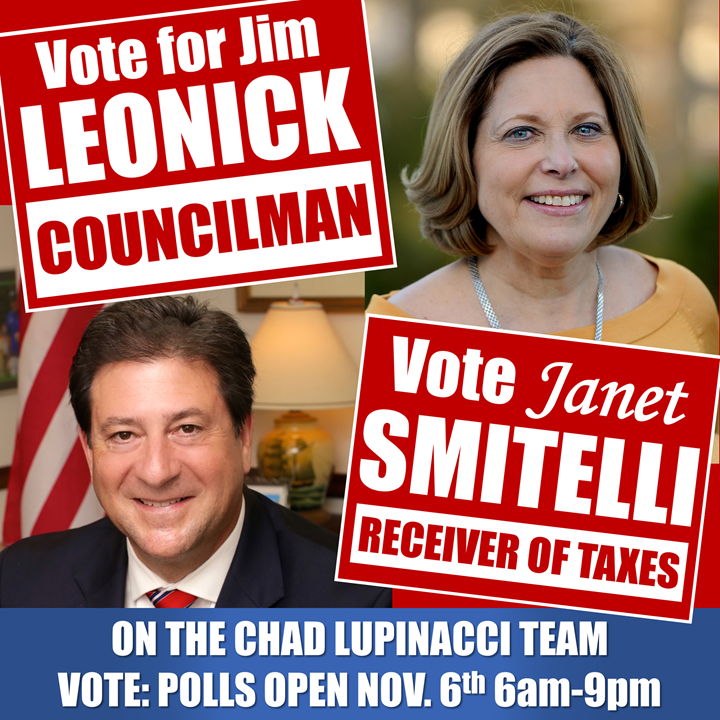