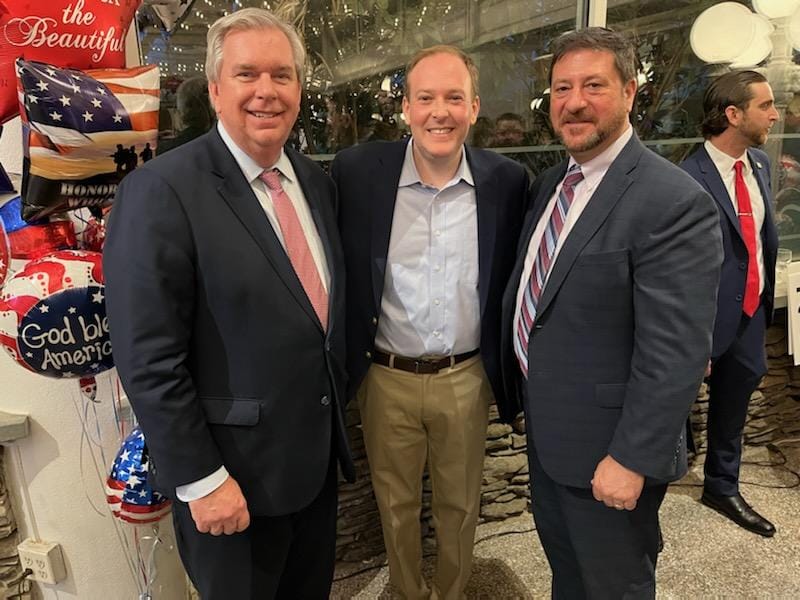 Chairman Tom McNally, Congressman Lee Zeldin, and future Vice Chairman Jim Leonick at a Zeldin for Governor event in May 2022.

Chairman Tom McNally was first elected at a special meeting held in September 2020 to fill the vacancy created by the death of former Chairman Toni Tepe. Taking on the role of Huntington Republican Party leader six weeks before Election Day 2020, Chairman McNally presided over two General Elections giving the Huntington Republicans their largest victories in decades, starting with the election of State Senator Mario Mattera (SD2) and Assemblyman Keith Brown (AD12) in 2020.

Chairman McNally then began to deliver on his promise to expand the ranks of the Huntington Republican Committee with a “big tent” philosophy, doing outreach to grow the party and recruit supporters of diverse backgrounds while undertaking the next election cycle, which brought unprecedented gains in November 2021.

In 2021, the Huntington Republicans held onto the Town Supervisor’s seat and one Council seat, while flipping another Council seat held by Democrats for 24 years and beating a Democrat incumbent to flip the Highway Superintendent seat to Republican control. Under Chairman McNally’s leadership, the town elected Supervisor Ed Smyth, Councilman Dr. Dave Bennardo, Councilman Sal Ferro, and Highway Superintendent Andre Sorrentino.

A new Vice Chairman, Treasurer and Secretary were also unanimously elected to join Chairman McNally on the Huntington Republican Committee Executive Board.

Longtime Executive Committee member Jim Leonick of East Northport was elected Vice Chairman. Jim has also served on the Huntington Republican Committee’s Law Committee and is a former candidate. A local attorney and managing member of Leonick Law, P.L.L.C., focusing on plaintiff’s personal injury, estate and elder law planning, and real estate, Jim has been an active volunteer in numerous local community organizations, including the Rotary Club, Boy Scouts and the Ancient Order of Hibernians. Jim was appointed in September 2020 to serve as an appellate administrative law judge for the Town of Huntington’s Bureau of Administrative Adjudication; Jim resigned that role in early 2022 to resume his role with the Huntington Republican Committee.

Diane McNally, a member of the Executive Committee who has led the Fundraising Committee since 2020, was elected Secretary. Since Chairman McNally assumed the role of party leader in September 2020, Diane has led efforts to recruit a team, organize and expand fundraising for the Huntington Republican Committee. Diane, a Centerport resident, is a longtime insurance professional who previously served on the Board of the Republican Women of Huntington.

In the photo (l-r): Tom McNally; Congressman Lee Zeldin; Jim Leonick at a Zeldin for Governor event in May 2022.