Trotta: The band played on... 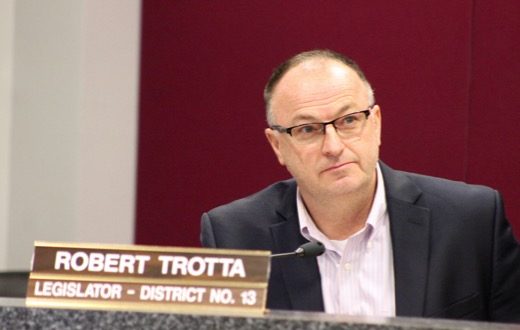 This is the same county that has total debt of over $2 billion dollars (that's billion with a b) and has borrowed an additional $150 million from the sewer fund, $350 million to pay pensions, and wants to borrow another $60 million over the next two years to pay for police retirements. I have nothing against the Long Island Music Hall of Fame, but it is simply ridiculous that taxpayers have to foot the bill for such an endeavor during this fiscal crisis.

Unfortunately this deal appears to be far more about politics than responsible governing.

The funding was part of several bills passed at the Suffolk County Legislature's final meeting of 2016, which included "Jumpstart Suffolk" and "Sart-Up/NY" funding for several projects including the Ronkonkoma Hub, Blue Point Brewery project and Mattituck Traffic Study, among others. $200,000 in funding was also included for planning and design of downtown Kings Park, presumably to garner my support for the bills as a champion of the hamlet's revitalization effort or at least buy my silence on the matter.

The new Kings Park funding materialized not in response to any request made by the Town of Smithtown and came as a complete surprise to Supervisor Vecchio who had no knowledge of the additional initiative prior to the introduction of the legislation, yet suddenly, it was available. Obviously, my dissenting vote along with this piece demonstrates that the County Executive's hush money could not silence my opposition.

Various halls of fame across the nation are struggling mightily and in man cases have been forced to close their doors. Undeterred by this fact and the recent failure of the Suffolk County Sports Hall of Fame, which now exists as some photos on the walls inside the Southwest Airlines terminal at Long Island MacArthur Airport after five mostly in-the-red years in Patchogue.

County Executive Bellone and some lawmakers are again gambling taxpayer dollars on such a venture. While the notion of throwing taxpayer dollars at such a risky endeavor is concerning, the siting of the venue in Wyandanch is troubling. This is the latest attempt to breathe life into the grand Wyandanch Rising vision, the transit-oriented, mix-use development project funded by hundreds of millions of dollars in public money designed to transform the Wyandanch community.

Somewhat predictably, the endeavor has not gone according to script thus far, prompting the administration to come up with new ways to prop-up the project. With all currently occupied residential units in the development requiring subsidy and only a fraction of available retail space in the development rented, Suffolk County government (and its taxpayers) is coming to the rescue.

First, by funding the siting of the Hall of Fame, which will operate rent-free at the location in an effort to promote interest and increase foot traffic and second by potentially relocating the Martin Luther King Health Center with the rent paid by the Suffolk County taxpayers to a private developer to anchor the development's commercial space and guarantee a revenue stream that otherwise might not be attainable. While I suppose it is possible that the presence of the center could potentially draw some associated businesses, such as a laboratory to the development, it is just as likely that the presence of the health center could deter other residents and businesses that would prefer not to have a health center for a neighbor. I'm not sure at this point if Wyandanch is in fact rising, but one thing is for sure, the cost to taxpayers sure is.

Suffok residents should be concerned, not only with the financial state of this county and the cost of living here, but at the lengths County Executive Bellone will go in order to pursue a questionable vision and protect what is left of his legacy. He continues to promise a better tomorrow while at the same time mortgaging our future. I wish the Long Island Music Hall of Fame great success, but I fear that if the administration continues down this irresponsible path, we all may have to read about it from our homes in the Carolinas.